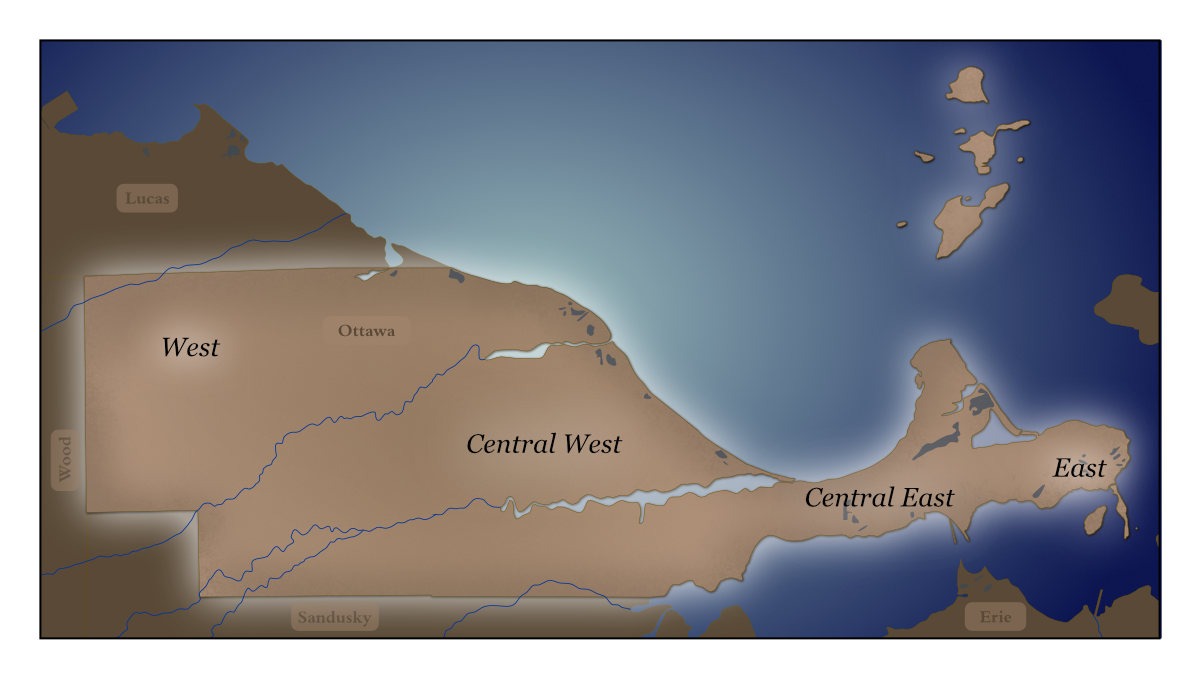 Starting out as Van Rensalaer, Catawba Island Township was later named for a piece of land that, while technically separate from the mainland by a narrow lagoon, is for all practical purposes a peninsula. The lagoon is left over from a prehistoric extension of the Portage River. The township’s topography, containing rich soil supported by limestone outcroppings that rise above Lake Erie, was once rural in nature and at the center of what was known as the “Peach Capital of the World.” A few proud fruit growers remain, but most of Catawba Island is home today to marinas, summer bedroom communities, and retirement villages. It also provides easy access to the Lake Erie Islands.

Part of the once-bustling Camp Perry-Erie Ordnance Complex, Camp Perry arose out of marsh in Erie Township just after the Spanish American War when the U.S. Army established a facility for gunnery training. It was later a separate facility from the Depot, which was designated for weapons testing, Camp Perry having metamorphosed into a training facility for the Ohio National Guard during peacetime and for new recruits during both world wars. During WWII, it was a frequent stop for celebrities, such as Bob Hope and Bing Crosby, with the USO entertaining the troops. The facility also served as a POW camp for German and Italian prisoners, most of whom were hired out as day labor to surrounding farms. For more than a century, Camp Perry has been home to the National Outdoor Rifle & Pistol Championships held each year in July and August. Today the facility is still used as an Ohio National Guard facility, home to the 200th Red Horse Squadron.

Erie Proving Ground (and its many aliases):

Following the Spanish American War, the U.S. Army recognized that many of the participating soldiers had demonstrated a severe lack of basic weaponry skills. In response, the Army opened a camp to train gunners in the marshlands of Erie Township at what was originally called the Camp Perry Proving Ground. Camp Perry and the Proving ground were later designated as separate facilities, one used for military training, the other for testing weapons. The latter was renamed the Erie Ordnance Depot and then the Erie Army Depot. They were often referred to together as the Camp Perry-Erie Ordnance Complex. The Depot became a major testing facility for weapons in both world wars and during the Cold War. In the early 1940s, about 5,000 people worked at the Depot while over 70% of the artillery weapons used by the Allies underwent testing. A sizeable area of the lake offshore in that vicinity remains off limits to the general public today due to the possible presence of unexploded ordnance just under the waves. In those war years, the federal government constructed homes to house employees in a development known as Erie Gardens in Port Clinton. Weapons continued to be developed for the Cold War by ARES, Inc., which still maintains a small facility there. Most of the original Proving Grounds are now part of the Erie Industrial Park.

Originally called Isle des Fleures, or the Island of Flowers, the 805-acre island now known as Middle Bass one of three Bass Islands located in Put-in-Bay Township. That first name reflected the impression made on French explorer, Robert La Salle, when he and his crew landed there in 1679. It would stick for 200 years until it was acquired by a German count in 1856, who turned it over to grape cultivation. By 1875, the Golden Eagle Winery on Middle Bass Island was said to be the largest wine producer in the United States. In 1884, it became the Lonz Winery. The Lonz family operated it until the death of George Lonz in 1968. In its heyday, the famous winery was a popular destination for visitors, including five U.S. Presidents. The winery now belongs to a corporation bearing the Lonz name and, since 1979, the wines have been made by Italian enologist Claudio Salvador. The State of Ohio purchased the original winery and grounds in 2001, and they now make up the Middle Bass Island State Park.

The second largest and least populated of the three Bass Islands is North Bass, one of many parcels of land in what is known as the Lake Erie Islands Archipelago, most of which lie within Put-In-Bay Township. These islands consist of raised limestone outcroppings in Lake Erie’s shallow western basin. North Bass Island has been primarily been used for grape cultivation throughout its history. On the southwest corner of the island is a small, unnamed creek that flows into Manila Bay. The unincorporated community of Isle Saint George has existed since the 1860s, which is still served by a tiny Post Office that first opened in 1874. About 25 permanent residents live on the island. The state of Ohio recently purchased 589 of the island’s 689 acres to preserve it from development and operates it as North Bass Island State Park.

In the 1820s, Cincinnati speculators purchased land at the mouth of the Portage River and plotted a town. Its name was intended to draw favor from the man behind the Erie Canal’s construction across upstate New York, DeWitt Clinton, whom the Ohio Legislature had hired as an advisor on construction of the Ohio Canal. But he favored both Toledo and Cleveland, which led to their expanded development. Meanwhile, Port Clinton slowly grew as a local trading center. In 1840, it was named the county seat of newly formed Ottawa County, a position it has maintained through the county’s many stages of commercial and cultural development.

Three of the county’s five prehistoric native mounds were discovered in Portage Township, its proximity to the Portage River and Sandusky Bay having long made it an important crossroads. The de Lery Portage, said by some (though never substantiated) to be in the approximate location of Port Clinton’s Fulton Street, was an important overland trail between Sandusky Bay and Lake Erie. Portage Township was formed from the land in its vicinity. Legend has it that two sailors, Samuel Mills Lockwood and William Townsend, happened upon gypsum deposits in 1821, and later organized Portage Plaster. A quarry continues in operation there today, owned by U.S. Gypsum. Neighboring the village of Gypsum is the Erie-Ottawa International Airport, a busy vacation-season hub between Cleveland and Toledo, one of whose taxiways leads to the Liberty Aviation Museum.

The Lake Erie Islands within Ottawa County make up Put-In-Bay Township. A village of the same name is the township’s center on South Bass Island. Put-In-Bay was the base from which Commodore Oliver Hazard Perry and his flotilla set out on September 10, 1813 in pursuit of the British fleet that, up until then, controlled the Great Lakes in the War of 1812. An ensuing battle resulted in a victory for Perry, the first time ever that an entire British fleet was defeated. Perry’s Victory and International Peace Memorial stands on the island, where casualties from both sides are interred. Early on, thanks to the latent-heat effect of Lake Erie, the islands were found to be conducive to grape-growing and have supported a major wine industry ever since. Today, Put-in-Bay Township is a big draw for fishing, boating, swimming, and camping throughout the warm season.

Put-In-Bay, the village, is the center of culture and commerce for Put-In-Bay Township. The village will forever hold a special place in American history: Commodore Perry harbored his forces there leading up to his famous capture of the British fleet at the Battle of Lake Erie in 1813. Perry’s Victory and International Peace Memorial, where casualties from both sides are interred, commemorates that event. Put-In-Bay was later home to John Brown, Jr. who, as a surveyor, plotted the community and became a leading citizen. The village developed around the wine industry, and has long flourished as a vacationers’ destination.

In 1856, twenty men from Cleveland and Sandusky came together over two related concerns: a decline in wild game, particularly duck populations, and the overall impact that human activity had on nature. They represented the beginning of the conservation movement in America. After its name passed through a number of iterations, it is today known as the Winous Point Marsh Conservancy. The organization has long been at the forefront of wetlands conservation and waterfowl management. It continues in that capacity today, having recently provided the venue for fifty students to perform research toward completion of advanced degrees in related sciences. Located at the western end of Sandusky Bay on its north shore, in its 170-year history, it has served as a laboratory for both basic and applied science, contributing much of what is understood about wetlands management today.