A Very Brief History of the Keeper's House*

One of the first settlers on the Danbury Peninsula was Benajah Wolcott. Born in New Haven, Connecticut on April 7, 1762, he enlisted in the army at the age of 14 and served until 1784, when he was 22 years old. Without land or a trade or profession, he worked for others until 1806 when he was hired to work on a survey team going out to map the western most one-half million acres of the Connecticut Western Reserve. This Sufferers Land or The Firelands, along Lake Erie, would be given to Connecticut people who had been burned out by the British during the Revolution. 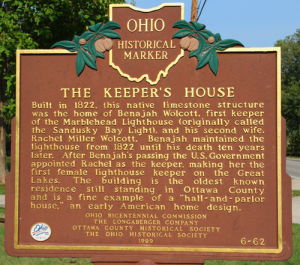 Benajah returned to Connecticut when the survey was finished, determined to settle on the Danbury peninsula. In 1809 he bought 114 acres here, and came out with his wife, three children, and two hired men. They built a log cabin near the site of the present stone house.

The times were unsettled on the frontier, and in 1812, fearing an invasion by the British and their Indian allies, the Wolcotts fled to Newburgh, on the Cuyahoga River. Shortly after they left, a large force of Indians emboldened by Tecumseh or his brother, The Prophet, came ashore and fought the first skirmish of the War of 1812 on Ohio soil on September 29, 1812. A monument about 1/2 mile west of the Keeper’s House tells the story.

Elizabeth Wolcott died at Newburgh during the war. What may be her grave has been recently discovered in the Erie Street Cemetery, in Cleveland, Ohio, just across the street from Progressive Field!

Commodore Oliver Hazard Perry defeated the British at Put-in-Bay in 1813 and soon thereafter it became safe for the settlers of the Danbury Peninsula to move back to their homes.

Benajah Wolcott and his children moved back after 1815 and found their cabin to be intact. Their financial situation was also much improved by Benajah’s Revolutionary War veteran pension which he was granted and received in 1819. He married Rachel Miller on March 10, 1822 and on June 24 he was appointed keeper of the newly completed lighthouse on Marblehead. The government appropriated funds for the building of the lighthouse itself and for a home for the keeper on the same site. Benajah Wolcott, it would seem, had two homes, one at the lighthouse and one which he had built by William Kelly, the stonemason who built the lighthouse, at his farm three miles away for his new bride. This house was built of limestone from an early quarry a short distance from the back of the house. The house is an excellent example of early domestic architecture in the Firelands.

Benajah Wolcott was keeper of the lighthouse until his death due to cholera in 1832 at the age of seventy. At this time the Treasury Department appointed the most obvious and capable replacement it could. Benajah’s wife, Rachel, became the first female lighthouse keeper on the Great Lakes on October 25, 1832.

We would love to hear from you! Please feel free to contact us via email if you would like to share with us any information about the early members of the Wolcott family. If you have any artifacts which can be traced to the Wolcott’s and would like to donate or loan them to the Keeper’s House Committee for study and to share with our many visitors, including local students of history, we are always available to answer your email or letter.

*Part of this brief history is taken from The Marblehead Lighthouse, Lake Erie’s Eternal Flame by Betty Neidecker.

The Society conducts programs to make the Wolcott Keeper’s House a place where history comes alive and where education, music, crafts, work and fun intermingle to depict life on the Ohio frontier.  Typical past events have included hearth cooking demonstrations of frontier cooking over an oven hearth, “History Speaks” actors sharing local stories by local storytellers, and the fall festival to honor Henry Wolcott’s Civil War service with a Civil War encampment.  Please view our Events section to learn more about upcoming programs at the House.  We hope to see you there!